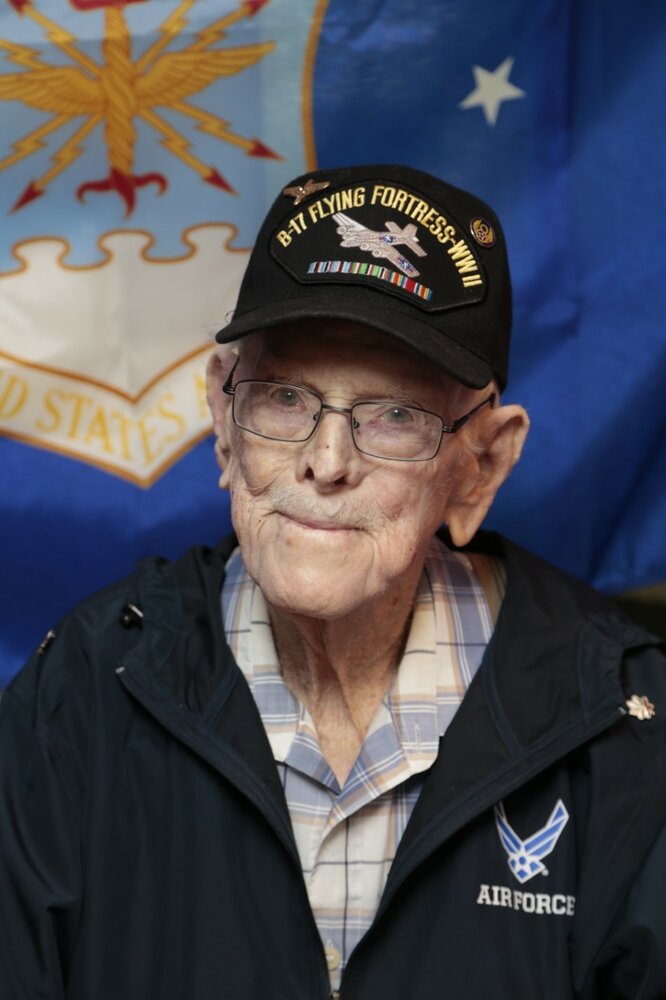 James (Jim) Nolan passed away peacefully at his home on Monday, May 23, 2022. He was born on August 26, 1921 in Weymouth, MA.  He graduated from Bridgewater State Teacher’s College in MA in 1943.  During his senior year, he enlisted in the Army Air Corps.  Immediately after college, he began training to become a pilot. He married his college sweetheart Madeleine (Dee) DeSorcie in 1944 before being assigned to England in WWII.  He served in the 401st Bomber Group in the 8th Army, known as the Mighty Eighth.  He flew 30 combat missions over Germany as the pilot of a B-17 bomber.  He returned to civilian life after the war and was a middle school teacher.  At the same time, he earned a Masters in Education at Boston University in 1949.  In 1951, Jim was called back to active duty with the U.S. Air Force where he completed jet and helicopter pilot training. He was then assigned to the 74th Air Rescue Squadron as a helicopter pilot in Fairbanks, Alaska.  While there, he distinguished himself by rescuing a bush pilot, nurse and baby from the frozen Yukon River during a snow storm at night.  His assignments also took him to Texas, New York, Panama Canal Zone and Alabama.  Jim’s last military assignment was Director of Research, AF ROTC Headquarters at Maxwell AFB, Alabama (AL).  After 26 years of service, he retired as a Lt. Colonel in 1969.  In 2019, he was honored with a Quilt of Valor for his military service.  After retiring from the USAF, he took a position as Assistant to the Dean, School of Business, Auburn University (AL) from which he retired in 1981.  Jim enjoyed visiting family and friends, reading, and golfing during his retirement years.  Jim was preceded in death by his parents, one brother and two sisters.  His wife Dee passed away in 2013.  He is survived by his children Richard (Nieves) Nolan, Robert (Linda) Nolan, Pauline (Ray) Geiselhart and Patrice Nolan as well as numerous grandchildren and great-grandchildren. At his request, he was cremated. There will be a memorial service held in Auburn, Alabama at a later date.