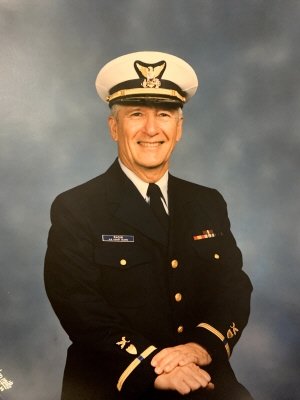 Arthur Eugene “Gene” Radin, 90,of Nicholasville, KY passed away April 25, 2020. He served 42 years in the U.S. Coast Guard mostly in the Reserves. His wife of 68 years, Margaret “Peggy” Engelhardt Radin, joined him in the Coast Guard Reserves and retired as a Chief Petty Officer. Together Gene and Peggy have 62 years of CG service. Of the numerous military ribbons and medals awarded to Chief Warrant Officer 4 Radin, he was most proud of the Navy Achievement Medal awarded him by the Navy Logistics Command for service while assigned in Bahrain during Operation Desert Shield.

Gene earned a B.A. from Florida State University and M.Ed. from Miami University of Ohio. He was retired from a successful sales career with the Koppers Company. Gene was Kentucky Colonel, a member of the CG Combat Veterans, the American Legion, the CG Auxiliary and lifetime member of the Reserve Officers Assoc. and the Alpha Kappa Psi Nation Business Assoc. He volunteered for many years with Central Kentucky Radio Eye. Gene and Peggy were long-time volunteers at the Thomas-Hood Veterans Center along with volunteer service to a variety of other non-profit organizations.

In addition to Gene’s beloved wife, he leaves to cherish his memory his daughters Wendy Henry (Keith) of Lexington, Becky Turbeville (Wayne) of Crestwood, KY and five precious grandchildren: Devin and Shae Henry plus Mitchell, Jamie and Aiden Turbeville. The family appreciates the help and support of the Radin’s many friends.  In accordance with Gene’s and Peggy’s wishes, they will be laid to rest with military funeral honors at 2:30pm October 1, 2021 at Camp Nelson National Cemetery.  A LIFE CELEBRATION will be from 3:30pm - 8pm Friday, October 1, 2021 at Clark Legacy Center, 601 E. Brannon Rd, Nicholasvile, KY 40356.   Memorial contributions may be made to the Thomas-Hood Veterans Center.

To send flowers to the family or plant a tree in memory of Arthur Radin, please visit Tribute Store
Friday
1
October