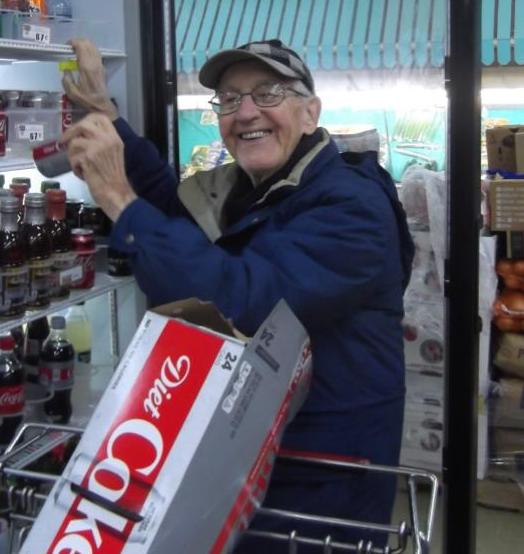 Paul Evely was born in Detroit, Michigan on April 7, 1923. He died very peacefully in Lexington, Kentucky on August 11, 2022. After enjoying his breakfast as he always did, and attending exercise class as he always did, he went to his apartment to rest and fell asleep on his couch one last time before the resurrection.

There will be a memorial service at Clark’s Legacy Center on Brannon Road in Nicholasville KY on Sunday, September 11th at 1:30 p.m. with a reception immediately following. Feel free to arrive anytime after 1 p.m. His cremains will be buried with military honors at Camp Nelson Cemetery in Nicholasville KY on Monday, September 12th at 11:00 a.m. All family and friends are welcome at both.

The family requests no flowers be sent, but any who wish can make a donation to Paul’s favorite charity – The Community Service Center of Wilmore-High Bridge, P O Box 52, Wilmore, KY 40390.

Paul lived his life to the full for 99 years and 4 months. He was one of 8 siblings and is survived only by his sister-in-law Doris Evely. When his mother Marina died when he was just a boy, his father Lewis remarried, and Paul gained two additional siblings. He is survived by his sister Nina Johnson (Drew) from Nashville TN.

Paul married Ottolyn Tissing in 1952. They were married for 57 years until Ottolyn’s passing in 2009. Thru the years they lived in Detroit, East Detroit, Washington Township, Richmond (all in Michigan), Clearwater FL, and finally Wilmore KY.

Paul worked for Chrysler Corporation for over 30 years. He was a proud U.S. Army veteran, seeing active service in WWII. He had the privilege of flying to Washington D.C. on a freedom flight a few years ago as veterans were privileged to do. He loved sports, especially hockey (Detroit Red Wings) but also baseball and football (Detroit Tigers and Lions). He also loved college football and when talking about an NFL player he would always know where they played college ball.

Paul loved his family, especially taking pride in his grandchildren and great-grandchildren. He would often carry photos and share stories about them. As long as he was able, he loved to get down on the floor and play with them or read to them.

But his immediate family is just the tip of the iceberg. When one lives over 99 years, he must say tearful goodbyes to most family and friends from his generation. But Paul’s secret to longevity was to maintain relationships with the younger generations. Until three years ago he would make annual trips to Michigan and Canada, driving himself and making the rounds throughout eastern Michigan and Canada. When he wasn’t travelling to see them, he would call regularly.

Paul is survived by MANY nieces and nephews that he has stayed in touch with through the years. He talked daily with his daughter Marsha & Dan, and very regularly with his son Dale and with a dear nephew Bill Osborne in Ontario.

But the list goes on. After retirement he was able to invest his time in his only hobby – people. Besides maintaining relationships with the many family members already mentioned, Paul has hundreds of friends – and for most he remembered their phone number without needing to refer to a list. While he lost many along the way, he easily made new friends of all generations. And he never neglected a friend as he continued to accumulate more of them. For many years, to every young person in Wilmore he seemed to be “Grampa.”

Since moving to Wilmore KY in 1996, Paul filled the pop machines at the local IGA store and did some occasional shelf stocking. He was often seen walking around Wilmore, greeting everyone along the way as he came to know all he met as friends. He delivered meals on wheels until three years ago. He loved his home and his neighbors.

Nearly two years ago Paul needed assistance with his daily living and with granddaughter Sharon’s help we found Highgrove Tates Creek in Lexington – an absolutely wonderful place. While Paul initially talked of a desire to move back home at some point, he settled in and came to know nearly every resident and every staff person. His favorite was probably the chef, as he always raved about the food. Upon entering Highgrove you might often see Paul sitting besides the receptionist, “helping.” We are so thankful to have found Highgrove as it was a wonderful place for Paul to live his last two years.

We are also thankful for U.S. Senator Rand Paul and his Kentucky staff (especially Natalie) who were able to help secure a VA pension for Paul. He was so happy to hear that news as money was his only real worry – and this was no longer a worry.

Paul loved the old hymns and could sing MANY of them by heart. He attended Wilmore Free Methodist Church until moving into Highgrove. At Highgrove he attended church and Bible study regularly. But while in Wilmore Paul often visited other churches as well. If their doors were open, he would happily go in to sing the hymns and fellowship. He would often repeat what his father had told him, “There’s a little good in every church.”

But Paul also studied the Bible on his own as his father had guided him. And he came to understand many years ago God’s plan to ultimately save all mankind, reconciling the entire universe to Himself. While Paul was non-confrontational, he would often share his faith and belief in universal reconciliation when he had opportunity.

And so a long life well lived has come to an end. But this is not really the end of his story. Today Paul rests from all worry, weakness, sadness, and struggle. He awaits the sound of the Lord’s trumpet and when the dead in Christ are raised, he will (I think) be near the front of the line. And then – what a great reunion that will be!