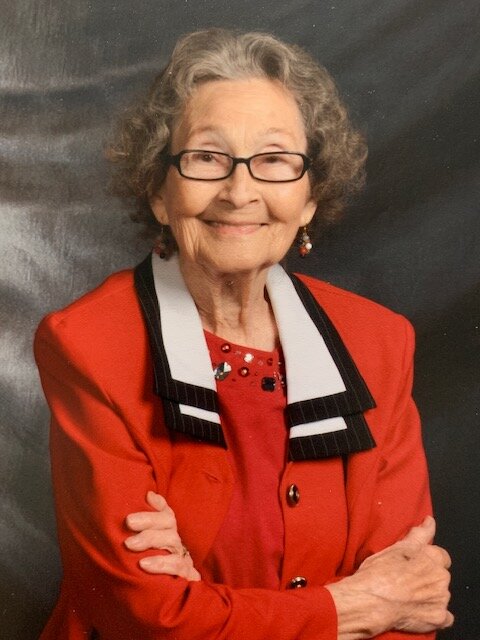 Betty Jean Perkins Brewer, beloved wife, mother, Mamaw, sister, and Christian, passed away Tuesday, January 11, 2022, following an extended illness. She follows her cherished husband James, to whom she was married for 74 years, to Heaven less than two months after his passing. To all those that knew and loved her, this makes sense as you never saw Betty without James. Born May 20, 1929, to Dewey and Gladys Perkins, Betty lived a life of faith, love, and charity. She always had a smile on her face and a good word for whomever she saw.

Betty was a member of Bethel Baptist Church where she was a loyal follower, participating in Bethel Baptist WMU, teaching Sunday School classes and Vacation Bible School, singing in the church choir, and tending to other needs of the church as she was called to service. Betty loved her church family just as her husband James did, and we are happy they have been reunited in Heaven.

Betty, along with James, was devoted to family, especially her grandchildren, and loved every minute with them from the time they were babies. As they grew, she and James picked them up after school and spent every afternoon with them. Betty loved to cook, and her Sunday lunches after church were legendary. She also loved camping and taking trips to the lake and to Florida with her siblings, children, and grandchildren, something she and James did for many years. Betty worked in her younger years at Union Underwear prior to the adoption of her children. In addition to time well spent with her family, Betty was the bookkeeper for Brewer’s Body Shop, Brewer Auto Sales, and Brewer Apartments. She also worked at Capital Day as a pre-k aide when  Paul and Tara were students there.

Betty leaves three children, Timmy Brewer, Deirdre Brewer Cohorn (Ronnie, Jr.), and John Brewer (Kathy). She also leaves behind three grandchildren that she loved dearly; Tara Brewer, Paul Brewer and Matthew Cohorn; and one great-granddaughter, Josie Baetens. In addition, Betty is survived by a brother, Jerry (Shirley) Perkins, and four  sisters, Ruby Stine, Ann Doris Carter, Joan (James) Cook, and Connie Shelton, as well as several sister-in laws, brother-in laws, nieces, and nephews that she loved dearly and that loved her in return. James and Betty were devoted to each other and to their family, and they have left behind a legacy of love that will never be forgotten.

In addition to her husband James, Betty was preceded in death by her parents as well as her brothers Dewey Lee Perkins and David Perkins, and a sister Frances Aline Woodard.

Special thanks to Cindy Manning who has cared for James and Betty for the past two years, allowing them to remain in their home and together.

Services will be conducted by Brother Mike Young on Friday, January 21 at 11am at Clark Legacy Center in Frankfort. Visitation will be held Thursday, January 20 from 5-7, and on Friday from 9:30 to 11.

Online condolences may be expressed at www.clarklegacycenter.com.