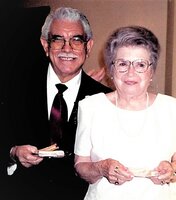 Rev. Luis Armando Divas, 96, passed away Wednesday, November 2, 2022.  He was born in Guatemala on February 1, 1926 to the late Martin Divas Lopez and Natividad Corleto

Rev. Divas first came to the United States in 1948, planning to study architecture.   On a trip to New York City to view the magnificent buildings, his attraction was drawn instead to the homeless people living in the shadow of those buildings.  Touched and troubled by their plight, he gave up thoughts of architecture and resolved to study for the Presbyterian ministry.

After graduation from Maryville College, he attended Princeton Seminary, where he met his first wife, Mary Ruth Muffley.  In 1955 he graduated from seminary and was ordained a Presbyterian minister.

Funeral Service will be held Thursday, November 10 at 1:00pm at Clark Funeral Home, Rose Hill with Pastor Susan Bradish officiating. Burial will follow at Rose Crest Cemetery. Visitation will be 11:00am until time of the service.

In lieu of flowers, donations may be made to Finding Freedom Through Friendship, finding-freedom-through-friendship.org, a Lexington based non-profit organization assisting impoverished single mothers and their children in Guatemala.