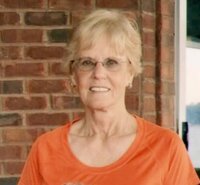 Josephine fought her final battle and passed away at Baptist East Hospital on the Morning of November 2nd, 2022.  She was accompanied by family.  She had recently celebrated her 87th birthday.

Josephine was born in a log cabin with no electricity or running water near Centertown, KY on October 19, 1935.  She was the second of 4 girls named after the sisters in Little Women:  Meg, Jo, Beth, and Amy.  She remained in the Centertown area until she attended Western Kentucky University in the fall of 1954 and was the first in her family to attend college.  She graduated with a Bachelor’s degree in Home Economics and Interior Design.  While attending Western, she met Michael Joseph Gardone.  The both went on to the University of Kentucky where Michael completed his PhD in Economics and Josephine earned a Master’s degree.  They were married on January 24, 1960.

While stationed in Baltimore for the army, they had their first son, Bradford Alan.  After Mike’s service, they moved to DeKalb where Mike taught at Northern Illinois University, and had her second son Craig Eliot.

Around 1968 they moved to Murray, KY where Mike began teaching at Murray State University.  Josephine stayed busy by starting a preschool and daycare program.  Through St. John’s Episcopal church she worked to support the Haitian immigrant community.  She was also heavily involved in the church Christmas Bazaar.  The family greatly enjoyed camping, boating, and fishing at Land Between the Lakes.  They made lifelong friends while living in Murray.

In 1973, Mike’s career took them to Frankfort.  It was at this time when Jo put her talents to work and began a long series of craft and antique businesses in the surrounding area of Midway and Georgetown.  For over 40 years she was part of various businesses in Midway and was a sole proprietor of Eagle’s Nest antique store for the last 15 years.  She was known up and down Main Street and worked with the Fall Festival and Economic Development Committee to better the community where she lived and worked for many years.  Jo permanently retired from her antique shop in 2018 and soon moved to Louisville to be closer to her two children and six grandchildren.  She remained in the Louisville area until her passing.

Josephine never shied away from a fight.  Whether it was battling the construction of a stock yard near her home, campaigning for an integrated public swimming pool in Murray, or sneaking in a last second bid at an auction, she gave it her all and rarely backed down.  If someone ever told Josephine she could not do something, it was a guarantee that she would try.

The Visitation will be from 9:00 am through 11:00 am on Saturday November 5th, 2022 at their longtime parish St. John’s Episcopal Church in Versailles, KY.  A funeral service will be held from 11:00 am to Noon.  A luncheon will be held immediately following from Noon until 1:30 pm.  A family interment ceremony will be held at 2:00 pm at Sunset Memorial Gardens in Frankfort.

In lieu of flowers, please send donations to the Alzheimer's Association of America.