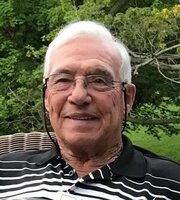 George R. Pennington, Sr., 82, husband of Pat Pennington, passed away on Tuesday, September 27, 2022. He was born in Paris, Kentucky on November 12, 1939 to the late Russell Pennington and Ora Stokes Delaney. George served as the Fire Chief for the City of Frankfort and was a Veteran of the US Navy.

In addition to his parents, he was preceded in death by his siblings, Rissie Wagner and Curt Pennington.