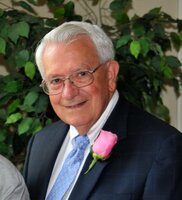 John Benson Shoemaker, 89, husband of Rachel (Bryant) Shoemaker, passed away on Thursday, June 16, 2022 at his residence. He passed peacefully with his family by his side. Born in Verda, KY, he was the son of the late Hubert and Levina (Pace) Shoemaker. He graduated from Eastern Kentucky University in 1962 with a Bachelor of Arts degree in Education and a Masters degree in Education Administration. John taught in Campbell County, Boone County, and served as high school principal at Walton-Verona High school. He later went on to work for the Department of Education. After retiring John worked as a textbook salesman with Merrell Publishing Company. John was a member and former deacon of Crestwood Baptist Church, Forks of Elkhorn Baptist Church and was a member of the Gideons.

In addition to his parents, he was preceded in death by his brother, Bill Shoemaker.

John was a dedicated Christian for all of his life. His utmost goal was to serve his Lord and Savior. John served his Lord printing, framing, and dispersing the Ten Commandments to be hung in the homes of family, friends and church family. John shared his love of history with his grandchildren and was a great storyteller.