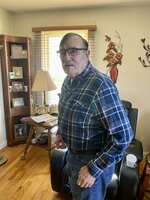 Carl Matthew Cummins “Pappy”, 80, husband of Linda Lacy Cummins, passed away on Thursday, February 24, 2022. A native of Frankfort, he was born on November 13, 1941 to the late Regis and Edith Bryant Cummins. He was a machinist for Rand McNally. Carl was a proud mason for 40 years with Lodge 4. He was always piddling with machines, farming tobacco, and working with cattle. Loved hunting pheasant in South Dakota and was always making people laugh and making them happy. Cal was a car enthusiast; he was always going to classic and muscle car shows and street rod nationals.

In addition to his parents, he was preceded in death by his sisters, Mildred Sharp, and his brother, Michael Cummins.

Masonic Service will be conducted by Hiram Lodge #4 F&AM at 1:00pm on Tuesday, March 1, 2022, the Lodge will open at Clark Legacy Center, Versailles Rd at 12:45pm. Funeral service will be held after the Masonic Service on Tuesday, March 1, 2022 with Rev. Robert Karsner officiating. Burial will follow at Sunset Memorial Gardens. Serving as casketbearers will be Brandon Cummins, Ryan Cummins, Sean Cummins, Avram Miller, Seth Gilbert, Doug Smith, and Troy Heightchew. Honorary casketbearers will be Chris Martin. Visitation will be held from 11:00am until 1:00pm on Tuesday, March 1, 2022. In lieu of flowers, memorial contributions may be made to Hospice Care of the Bluegrass.